Home Move to Myanmar : the ultimate guide Bank Accounts in Myanmar: Fees and Cards for Foreigners

Learn about banking in Myanmar : 10 best banks for expats in Myanmar …

Ever since the informal sector’s financial collapse in Myanmar where Panicked citizens rushed to private banks and created a liquidity crisis, the banking sector in Myanmar is again gaining stability slowly. The services for the customers are increasing from small to being ranges, for individuals industries, organizations. And if you are an expat trying to move to Myanmar you are possibly thinking about your savings. Since banks are an important part of anybody’s life and luckily the banks of Myanmar are increasingly offering services targeted at foreigners, there is not much to worry for you. We will list out the top banks from various aspects for you to avoid you from doing hard research exhausted after moving to Myanmar.

We dug up the details and before we serve it to you, here is a quick look at the banking system in the country.

The banking system in Myanmar is controlled and governed and regulated by the Central Bank of Myanmar after the state of Burma was founded. Earlier the bank was known as Union Bank of Burma. The economy of Myanmar is still cash-driven. And experts say a sudden change is not possible but slowly government and banks are making such policies for the people living there including the expats to lead an easier life. The bank supervises financial systems and regulates private and state-owned banks in Myanmar.

Q&A : Banks in Myanmar for foreigners and expatriates – Answers to the most asked questions

💳 Can I pay with a credit card everywhere in Myanmar?

No. Myanmar is a cash-based society, where 90% of the population do not have a single bank account. Therefore, you will always need some cash on you when living or traveling in Myanmar.

No. Banking system in Myanmar has not yet been digitalized. Locals prefer avoiding using banking services, which stagnates the industry development.

🏦 Is it easy for an expat to open a bank account in Myanmar?

Yes. You will only need to provide your passport and visa in order to open an account in any of the local banks.

The intrusion of technology in the banking system has not yet been possible. The banks and the government is trying to figure out what to do with the available technology hence the changes are slow. If we take a look at the accessibility of bank accounts for the local citizens, the banks are get unable to gain customers and convince them to jeep their money in secure bank accounts. Figures say so, like almost 90% people in Myanmar do not have a bank account. Hence the banking sector remains one of the most distrusted sectors. To change the situations banks are slowly going digital but yet cash is the king. 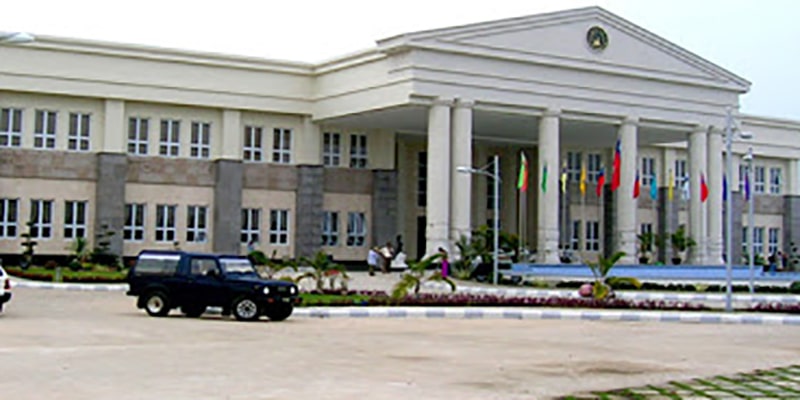 We can overall state that the digital evolution is gradually happening in the country where bug amounts of money can be transferred in seconds which is causing the banks to worry a little because the traditional way of transaction where people had to go to the branches all the way to the nearest city is slowly disappearing, especially from the youth. The financial technology companies are providing wallets that are electronic to transfer money. For the damage control, banks have enormously decreased their fees for a transaction to an all-time low amount, in fact, some banks are not taking any charge from the transaction is taking place from their own digital platform.

A few years back, if you were an expat in Myanmar every bank had a very few branches in the country authorized to do transactions in a foreign currency or to and from a foreign country. And even before that when expats we’re not allowed to have a bank account in Myanmar, their special cupboards, gardens, or underneath the soil were their safe places. Now, the banks are providing some products for the ex-pats, although they are very strict or non-customizable, the strict rules of central bank regulating foreign currency transactions have loosened the grip from the banks in the country a little bit.

To open a bank account in Myanmar, if you are an expat, things have changed for sure. Now if you have a valid passport and a business or even a tourist visa and a letter from your employer, you can do so. The national currency of Myanmar is Kyat but the scenario with foreign currencies is that the central bank regulations favor few currencies more than the others.

Some currencies like that are US Dollars (for obvious reasons), some southeast Asian currencies like Singaporean Dollar. Even though the availability of the transaction for these foreign currencies, the national currency if Myanmar has the biggest perk which is accessibility. You can access your money anywhere you want from an ATM or the nearest branch. But if you choose other currencies to store your money in Myanmar bank accounts, there are only a few branches and even in those, you have to either present yourself or write a checkbook. Old style, right?

It was established in 1994 and is popularly known as KBZ. It is a private sector bank and not to mention, one of the biggest banks in the private sector of Myanmar. It has almost 200 branches all over the country which is surely rising, with 80 branches where a currency exchange is possible.

Established in 1993, it is one of the biggest commercial banks in the country. It has adapted technology in the banking sector from the late 90s. It has branches in more than 24 major cities and provides several products. 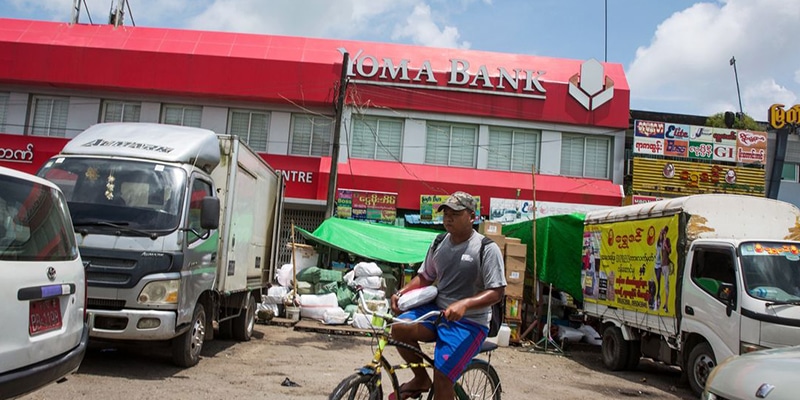 In short known as AGD Bank, it is owned by Htoo Group of companies. It started it’s customers services in commercial banking in 2013.

Popularly known as AYA Bank maintains its operations in almost 227 branches. It provides products for individuals and industries as with overall good services for the customers.

UAB offers its services for not only local community but for the foreign expatriate in the country too. It allows both domestic and foreign currencies in Myanmar. The Central Bank of Burma issues a license to banks who want to do business with expats too by allowing them to open accounts, and exchange currencies. 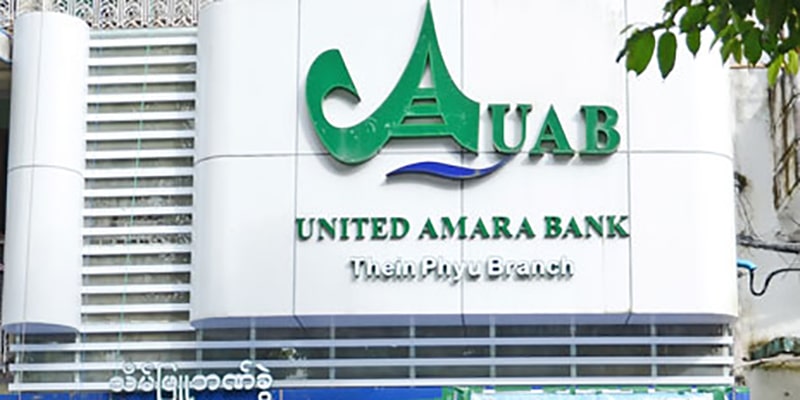 The CBB issues the license to United Amara Bank in 2012, which allows it to issue credit letters, and perform transactions in foreign currencies or international money transfers. As of now, it has a network of ATMs across the country and almost 70 branches.

Considered a pioneer in modern banking facilities, this bank was established in 1992 and has over 90 branches located in all the country .

This bank was established in association with the past military regime. It comes under the ministry of defense of the government of Myanmar. It is mostly run by ex military officers and has branches is Yangon and other major cities.

Myanmar Economic Bank established in 1976 it is one of the oldest banks of Myanmar. This bank being the oldest provides one of the biggest baking networks with almost 300 branches.

As the name suggests, it specializes for the customers of the bank who are foreign nationals and are in Myanmar for various purposes. It is a state owned bank and offers services related to foreign transaction and exchange or fund transfer.

Although it is not known for its financial services related to expats, it provides a good service and products for its domestic customers. In foreign services, it allows bill collection, letter of credit, payments which are international.

Other guides about moving to Myanmar :

Download my book « 7 mistakes your must avoid in Vietnam » for business, investment and relocation in 2023.