Home Move to the Philippines : the ultimate guide

Here are 10 reasons to Move to the Philippines …

The Republic of Philippines is an archipelagic country located in Southeast region of Asia. It is one of the five original sovereign archipelagic states of the world, which is a designation given to a country that consists of an extensive group, cluster, or chain of islands. The country is divided into three main geographical boundaries from north to south namely, Luzon, Visayas, and Mindanao. The capital city of the Philippines is Manila while the one with the most population is Quezon City. It is the fifth-largest island country of the planet with an estimated area to be around three hundred thousand square kilometers.

The population of the country had exceeded the 100 million mark by the year 2015. The official languages of the country are Filipino and English. It gained independence from the United States colonization in 1946. Since then the country has shown a steady graph of progression with intermediate curves of troughs. It is however now an emerging market and has the fifth-richest economy in Southeast Asia. Only the regional countries of Singapore, Brunei, Indonesia, and Thailand lead in this regard. In this article we will take a close look at why moving to the Philippines is an eye-catching option.

Best ressources and updated guides about The Philippines

💡 Our goal on Movetoasia.com is to give you the best updated informations and resources about life in south east asian countries and the Philippines.

You will discover detailed guides and videos about life in south east asian countries so you can prepare your expatriation or investments in this region :

Q&A : Move and relocate to the Philippines as a foreigner

🇬🇧 Will it be easy for a foreigner to communicate with the local Filipinos?

Absolutely. After years of the US colonialism, English remained one of the official languages of the country. If you are reading these lines, you most likely speak English, which you can use to communicate with the majority of Filipinos.

🎓 Is the Philippines a good country for students?

Yes. The Philippines is one of the leading Asian countries when it comes to the number of international students. Rich culture, developed education system, affordable living costs and vibrant nightlife attract students from all around the world like a magnet.

🎉 Will I be able to afford the same lifestyle as in my home country?

We are also the sure that yes. Indeed, most likely you will afford an even better lifestyle in the Philippines, as this country offers more for less money.

The first and foremost factor to consider when shifting bases is the economy of a country. No point in having exotic landscapes but not enough livelihood to meet the needs of the population. From 1996 to 2014, a period of 18 years, the GDP of the country rose almost four times elevating the living standards of the country massively.

It is expected and predicted that the country’s economy will remain amongst the fastest growing in Asia as well as the world at large. The biggest single indicator of this is the increase in return of Filipinos who previously worked overseas and the increase in arrivals of foreigners looking to thrive in the country.

Different people enjoy the beaches for different reasons. Some like them for their proximity to water, some for their vastness and remoteness, and some for leisure activities that the sand allows. 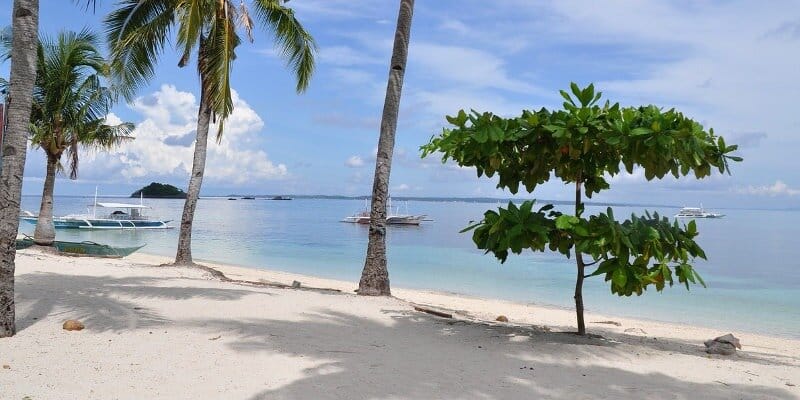 Well, whatever the motives may be, the beaches in the Philippines cater to those efficiently. With more than 7,000 islands constituting the country, the array of options is vast and unlimited and the beaches have plenty to offer. Many consider the country to be Asia’s beach capital.

Since the country has been positively impacted by such diverse cultural influences, the food also offers a wide range of cuisines. From Malay to Chinese, from American to Austronesian, everyone’s taste buds are very well taken care of.

The national dish of the country is Adobo which is a combination of pork and chicken stewed in vinegar sauce and then mixed with garlic, cooking oil, soy sauce, and peppercorns.

The basic cost of living in the Philippines is extremely low when compared to that of the developed Western countries. One can live a comfortable and content life with one-quarter of the expenditures required to live a comparable life in the United States.

The hospitality dished out by the local inhabitants country of the country is undeniably generous. The warmth felt by overseas visitors instantly makes them feel at home. Another aspect of the country that garners eyeballs is the beauty of its people in addition to the beauty of its locations. The country has people of diverse cultures and traditions living harmoniously. People from different ethnic backgrounds mix and due to this fact no incoming individual feels alien to the surrounding environment. The friendliness of the locals can be witnessed during the numerous festivals that happen throughout the year. The Ati-Atihan is probably the largest of them all which is held in the third week of January and is a week-long street celebration.

Accessibility to the Rest of Asia

The geographical location of the country is nigh-on ideal with it being situated halfway between Japan, North and South Korea, China, Australia, and New Zealand in the Pacific Ocean.

This makes it a great starting point to explore and travel the rest of Asia.

Familiarity with the English Language

English being amongst the most globally recognized and spoken languages, is also one of the official languages of the Philippines. With over 87 native, local languages being spoken through the length of the country the language that ties them together is English. This makes communication for and with the overseas convenient. There is no worry at all about language and communication barriers.

The nightlife and party scene of the country is vibrant at its core. It competes alongside renowned party countries of the world such as Spain and Brazil as having the most extravagant party life. After working hard in the office hours, the Filipinos do love to let loose and have a great time. The capital city of Manila is one of the best nightlife destinations in the world.

Like most Asian countries, the Philippines has a distinctive summer and winter season with May being the hottest month while January being the coldest one. The average temperature ranges from about 70-degree Fahrenheit to 90-degree Fahrenheit. The rainy season is a pretty prolonged one extending usually extending from June to November. The threat of Typhoons looms pretty large over the western parts of the country.

All in all, generally speaking, the Philippines is a country on the upward surge. The country is making impressive strides in the financial sector and is providing a satisfactory quality of life to its citizens and foreign visitors.

Hi, I am a French entrepreneur and investor living in Vietnam. Most people struggle with moving abroad, investing and doing business in Asia. So I created this website.

Other guides about moving to The Philippines :