Home Move to Vietnam : the ultimate guide Business tour in Vietnam : how to prepare for Vietnam rebound ?

Vietnam has been going through a tough time to slowly recover the economy. There has been a lot of fluctuations in the market. The substantial workforce that the country has been known about had to take a step back to their hometown to avoid further COVID infection; Business closure is also part of the reason; More and more people have lost their life to COVID; Many industries have to constantly adjust their business strategy to adapt to the situation. As much as we don’t want to mention the dark side of the story, this is the reality.

However, a system only collapses when it stops trying. And Vietnam is trying its best to revive the economy. As an entrepreneur supporting the business aspects and the economy of Vietnam, I have been seeing the authorities of Vietnam try their best to learn from developed countries to improve the situation. The effort is enough to show the resilience of Vietnam, proving its true potential in the Southeast Asia region.

And of course, necessary data is also required to support this belief. I will take you through some of the highlights of the economy in Vietnam to help you have a better understanding. The given ideas here are not 100% correct as they are preferences that I collected by doing extensive research and my personal experience going on many business trips. The point of this article is to help you conduct your research easier if you’re curious, or you even want to start opening a business or investing in Vietnam.

Why is Vietnam a hotspot for international companies?

The location of Vietnam in Southeast Asia is one of its strongest suits. It lies right at the centre of the region and is connected with China, Laos, and Cambodia. such a trait could be seen as an ideal location for international trades. Export and import become easier to circulate.

The second strong suit of Vietnam is the young population it has to offer. Vietnam is now ranked 14th among the most populous countries in the world. With almost 100 million habitats and more than 70% of those are younger than 35, it provides a potential workforce that can catch up with the demands of all industries.

The third strong suit is the level of education. As English is required everywhere, Vietnam began to improve and reinforce English as a mandatory skill from the primary level. Vietnam also encourages and establishes more English-related activities for people of ages to join to be exposed to a more international environment. I’ve been in Vietnam for 6 years and everywhere I go, people speak English well.

Not only English but the training courses in different professional major areas are provided for those who want to enhance their speciality. Especially in IT, Vietnam has done a great job creating an up-to-standard workforce that can follow up with the global demands in Technology. The number of IT startups started to increase tremendously in 2017. Hundreds of business ideas were given life and many of them became extremely successful in Vietnam. Such a trait shows how well Vietnam can catch up with the world despite the hard strike of COVID for the last 2021.

The fourth strong suit of Vietnam is the real estate market. Because of the US-China trade war in 2018, many factories began to relocate their factories to Vietnam. A part of that decision also relies on the availability of land. After the trade war, more and more countries began to study Vietnam to expand their market.

And finally, the increase in wealth also highlights Vietnam’s potential position in the global market. Vietnamese begin to buy more and consume more in electronic devices such as gaming computers, laptops, smartphones, etc; Clothing such as Uniqlo, H&M, etc; And F&B brands like KFC, McDonald’s, Starbucks, etc. The purchasing power has multiplied many times compared to 5 years ago.

Let’s take a look into the booming sectors in Vietnam and see how they’re doing.

The booming sectors in Vietnam

The textile and garment industry plays a crucial role in boosting the economy of Vietnam. As in 2018, when the US-China trade war occurred, the Yuan devalued tremendously against the US dollar. Moreover, Vietnam offered such a competitive edge, leading the country to become a potential partner with the US and receive a market share from China.

Also, the 25% tax imposed on China by the US makes it easier for Vietnam to export textile and garments to the US.

For those considering starting a business in Vietnam, textile and garments are a must-consider. The potential that this industry has to offer will surprise you in the long run.

Vietnam began to be in the spotlight among the countries that draw the attention of international companies looking forward to recruiting remote workers.

Jobs such as telesales, Website – application developer, content writer/copywriter, etc, became much more popular to work remotely to reduce infrastructure costs. As Vietnam has a population that is young and talented to serve this market, it’s getting closer to becoming one of the top choices for outsourcing.

Fintech is a rather new definition. However, it’s drawing a lot of attention from Vietnamese consumers. Besides those fintech applications of popular banks in Vietnam, ZaloPay, Momo, and some other fintech companies are leading the way to become a much more modern society.

Vietnam is likely to have the potential of becoming a cashless society in the future due to the rapid advancement of these fintech services. Vietnam is also known as one of the top countries with a high number of smartphone users.

Electronics is one of the few sectors in Vietnam that continued to burgeon after the strike of COVID on Vietnam. Even before the pandemic, Vietnam was already a strategic location for electronics companies, such as Samsung, to relocate their factories in China to Vietnam and sustain massive production, making Vietnam the top 12 electronics exporters of the world. Moreover, the trade war between China and the US made Vietnam the attraction for big names like Apple and Foxconn to relocate their factories. They have partially moved their production factories to Vietnam.

Most industries are still doing well at the moment. Right now, the 2 main focuses are adapting to the new conditions and pushing the statistics upward.

The “Vietnam” before Covid

The statistics of the past and the future may differ. But these numbers aim to help you have a better understanding of Vietnam before the crisis to provide solid evidence and encourage you to do your research to make your ultimate decision.

Before the pandemic, Vietnam was among one of the fastest-growing markets in Southeast Asia. In the manufacturing sector, the country received a substantial inflow of foreign direct investment. The constant growth of manufacturing and the constant investment stream from FDI were the two main growth drivers of Vietnam. Not only that, Textile and electronics were something that made Vietnam an appealing market to foreign investors because of their rapid expansion.

The inflows of FDI in 2019 was 20.4 Billion USD. All thanks to the strong investment of multinational companies such as Samsung. This big player among other renowned electronics companies has been one of the key investors in Vietnam. Since Vietnam is the focused market of Samsung, the country has become one of the most important foreign production hubs for this company. Half of the smartphones and tablets manufactured in Vietnam are exported to other countries. Samsung also started to build its biggest R&D centre (Research and Development centre) in Hanoi. The construction is planned to finish at the end of 2022.

Vietnam still thrived during 2020 despite COVID. Even though the speed of growth of the economy was down to only at a moderate level, Vietnam was one of the few countries that continued to expand. The country also had a positive economic growth of 2.9% and remained resilient with an FDI of 20 billion USD.

The first half of 2021 still performed very well as the pandemic was closely contained. Thanks to the rapid growth of exports, the economy of the country maintained its strong performance within the 1st and the 2nd quarter of 2021. The industrial sector was also another highlight that helped Vietnam standstill during the difficult period, with an increase of 9.3% of the industrial production in the first half. Moreover, the country still received a stable FDI of 9.3 billion USD, which is an impressive number during such a difficult time.

The recovery of Vietnam in the 4th quarter of 2021

The fourth wave of COVID has landed a severe strike on the economy of the country. There have been a lot of doubts that Vietnam wouldn’t be able to get back on its feet because of the 4-month lockdown. However, the evidence says the opposite. 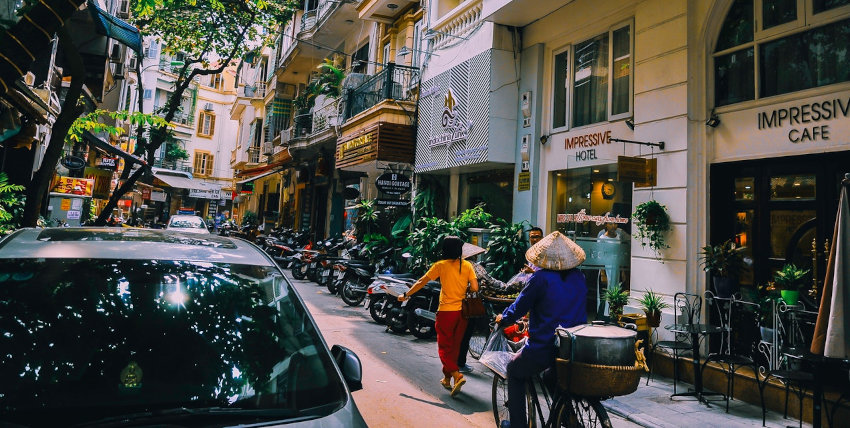 The resurgence of COVID-19 in several industrial hubs such as Bac Giang, Bac Ninh, Ho Chi Minh, Dong Nai, and Binh Duong caused severe difficulties to the economy of the country. These economic hubs are known to generate 60% of the GDP of the country. Solely on the enterprises’ side, a survey was conducted and 95% of them replied they faced difficulties because of COVID-19. 80% of the participants reported they saw an increase in the input cost, which includes material price, logistic cost, worker shortage, and lack of materials used for production. (This is a survey conducted by the General Statistic Office).

However, according to ADB (Asian Development Bank), it’s still quite optimistic about the future of the economy in Vietnam in the medium and the long run.

And of course, optimism has its reasons. According to Nguyen Bich Lam – The former Director-General of the General Statistics Office, the optimism is based on the quick recovery of domestic demand, with a great consumption power, and the stability of the country’s macroeconomic situation, have created a concrete base for Vietnam to slowly recover out of the crisis.

Not only that, but Vietnam is also one of the many members of many large-scale multilateral and bilateral agreements.

Investors still have a firm belief in the economic recovery of Vietnam, as the country still receives a decent FDI stream that could prepare it well for any upcoming projects.

And last but not least, the efforts of the government and the people in Vietnam to support and accompany the country in this difficult time.

As for now, it’s hard to seek any business tour in Vietnam at the moment because of the busy time that many businesses and the government have to put in to recover the economy. However, this sparks hope for a lot of potential projects in the future to come.

Therefore, if you’re someone interested in the business opportunity in Vietnam, make sure to keep yourself up-to-date with all the latest news about Vietnam in 2022. You can also follow my website Movetoasia.com. My website aims to help foreigners who are interested in investing and business opportunities in Vietnam. And I hope I can help provide you with useful information about the country.

As 2021 is coming by, I wish all the best things to come to everyone and no one will have to suffer from any difficulties ever again. 2022 is now the time for the world to come back even stronger.